It all started 20 years ago when Judy Berens decided to adopt an ocelot as a pet.

As an equestrian, she owned a large ranch, which seemed fitting to house a wildcat. After much research, she learned cat ownership is fairly complicated and that it would require a state license, several forms and over 1000 volunteer hours at zoos and other animal facilities.

Perhaps it was the ocelot’s keen searing eyes, satin smooth coat or beautiful symmetrical markings that made her want one so. All the red tape was worth it and she became the owner of her first ocelot named Sabrina. Of course, one ocelot is never enough, so Cody and Macho followed. Sometime thereafter, she took in a confiscated ocelot and a sickly cougar cub that had been in a garage in Loxahatchee.

Thus began Ms. Berens’ menagerie of felines whose population has grown up to 26 in number. These exotics include cheetahs, jaguars, clouded leopards, pumas, bobcats, caracals, leopards and servals, all residing on her preserve called Panther Ridge.
What began as an admiration for one ocelot has turned into a mission of animal conservation and education on the plight of the species. The ocelot community, for example, has dwindled to a mere 35 in the US. At one time their pelts were coveted to make luxury coats. The fact that it took 200 ocelots to make one coat severely depleted their population. 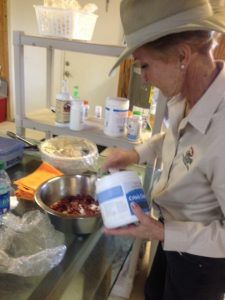 I first met Judy in the kitchen of her compound where she was preparing snacks for a tour.  A smart safari hat, crisp khaki shirt, and pearl stud earrings gave her the air of not just tour guide, but Chief Magistrate of her Pantherinae Colony; Queen Supreme of her Kitty Kingdom. Though she acted as their royal ruler, she was truly their humble servant. For here she was prepping meals in their spacious kitchen catering to her loyal whiskered subjects.

While chopping stew meat, she explained a wildcat’s diet. Stacks of silver bowls dotted the table. One bowl in particular caught my eye.  Fuzzy yellow chicks and furry mice spilled over the rim. They weren’t moving.

“Are these their appetizers and small plates?” I asked.
“Tapas,” she quipped. “The main course is beef, salmon, turkey and other fish as well as zoo-prepared foods.” 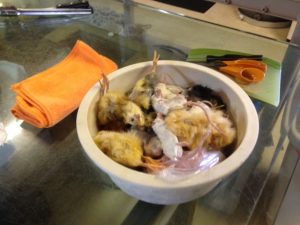 Trying not to feel sorry for the bowl of chicks and mice, I asked who her food supplier was.

“Cheney Brothers and Costco.”  She then held up a zip-lock bag containing a fresh portion of salmon. “I got this at Costco. No Kibble for these guys!”

“Oh,” I said, “I’m actually headed to Costco after this to pick up a filet of salmon for company tomorrow.” (For us humans, it’s salmon for special occasions. For these cats, it’s daily fare)!

On top of this Grade-A meal, she sprinkled fish oil, bone meal, probiotics and digestive enzymes to promote health and ward off pancreatic problems, which can be an issue. If the cats get sick, they see Dr. Stephanie Johnson at an Animal Clinic in Lake Worth. “She’s a wiz!” Judy added.

A few other people joined us as the tour started. Other than that, the complex was practically void of homo sapiens. Yet, the grounds were impeccably maintained.  Mulch covered the animal spaces and walkways.  The dark wood fencing was freshly painted; the black chain-link enclosures in perfect condition.  Garden chairs and Adirondack seating areas were strategically placed, enhancing the park-like setting.

I asked about her staffing.  She has one full-time keeper, two interns, and a few valuable volunteers. “Besides that, it’s just me–slave labor.”
Ms. ‘Slave-Labor’ is hardly at that caliber, and she chose her post of loving service intentionally, eyes wide open. Born in Minnesota, she was educated at Vassar, and then achieved her MBA at the University of Miami. A resident of Wellington since 1994, she has been active in the equine community showing horses.

Our first visit was to Charlie, the Cheetah. Ms. Berens tells us he’s a third generation captivity-born cat from South Africa.  He made his 39-hour journey to the US in a small crate.  Charlie is ten years old. Most cheetahs have a lifespan of eight.  Cheetahs are the second largest of purring cats.  She enters his cage through a safety entrance and crouches down to feed and caress the huge feline. 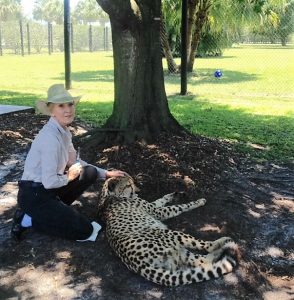 “Charlie loves to be primped and pampered,” she says brushing his head with a hairbrush. “Most cheetahs can sprint zero to 60 miles per hour in three seconds. They have an elliptical tail which serves as a rudder and adds torque to their hairpin turns, speeding up to 70 miles per hour.  But Charlie?  Charlie is slow.  He prefers to lounge; be groomed and get room service.  And why not?  If those services were offered to you, wouldn’t you accept?” Judy asks with a wink.

Charlie nibbled his tapas, enjoying the massage. Cheetahs are hypercarnivores, meaning they require high levels of protein to survive. Charlie gets three meat-heavy meals a day. 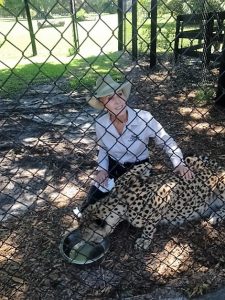 Lucky for him, he has a 2 1/2 acre enclosure, one of the nation’s largest for a single cat.  After Charlie’s meals, he rests and then runs zigzags up and down his spacious enclosure marking his territory.

The next cage we visited housed the Puma, the second fastest cat next to the Cheetah. They can sprint up to 45 miles per hour and are the world’s best soccer players. That’s right. Give them a ball and they show their amazing athletic abilities.  His favorite ‘ball’ is a watermelon, which, after a Kobe Bryant – like dribble around the cage usually ends up cracked open and consumed.  Pumpkins do quite well also. 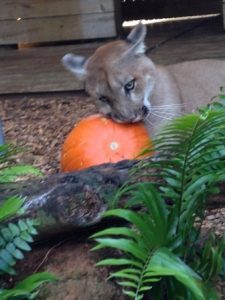 The puma’s name differs depending on its region.  In California, it goes by Mountain Lion. Florida calls it a panther.  In other areas, the feline is identified as cougar, catamount or one of almost 40 different names used for the same cat. We watched Brandy Lion and Dandy Lion relish their rodent delicacies. 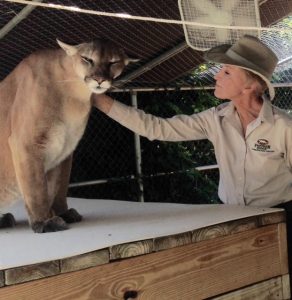 Across the walkway lived the beautiful Isabella. She was as gorgeous a specimen as a jaguar could be with her dramatic spots and irregular dotted markings.  Jaguars are considered the ‘pit bull’ of the cat family due to their chunky body and strength of bite. You don’t want to mess with them, for sure. That’s not likely to happen because of their endangered status. There are currently no wild jaguars left in the US.  Originally native to the lower 48 states, they roamed from California to South Carolina. 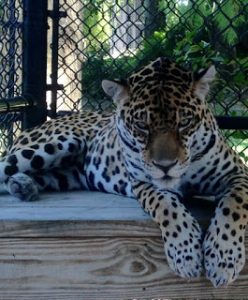 Next door lived Amos, a black leopard, velvety and mysterious. These cats are so agile and strong they can carry prey up a tree or balance themselves while sleeping on a branch, paws dangling.  But, like the story of so many they, too, are a disappearing breed.  In 1950 there were half a million worldwide.  Now, there are less than 20,000.

Well into our tour, I was once again struck by the cohesive lay-out of the grounds; I wondered where Ms. Berens acquired her design know-how for the compound.

“I have a lot of friends in zoos,” she quipped. “I like to implement the good designs that I see there.  The ultimate goal is the happiness and health of the animals.”

We then saw the Serval and Caracal habitat.  The Egyptian Serval was especially curious looking with its satellite dish-like ears.  Its hearing is so sensitive it can hear small creatures 10 feet away, jump horizontally, pouncing for a perfect attack on their prey. The Egyptians employed them to eliminate rats and other pests in their granaries.

Caracals have their own special talent; they have been known to jump 10-feet high, straight up and swat birds mid-flight.

As if it wasn’t enough to house, feed and care for these numerous cats, Judy Berens also donates to other organizations and programs that help cats in the wild. It is her goal to educate people about the incredible depletion of the species that she is witnessing.

“Unless we all get involved, these iconic animals will be gone in the next 20 years.”

Judy Berens is living out her passion for exotic feline preservation and promoting awareness to save the wildcat world.

Join Judy’s mission. For more information and ways to get involved, visit her beautiful compound at 14755 Palm Beach Point Blvd, Wellington, FL 33414.  Tours can be scheduled at the Panther Ridge website. http://www.pantherridge.org. 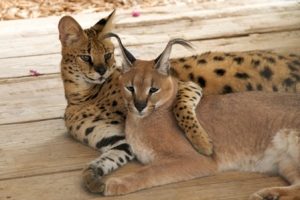 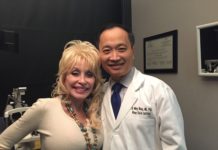 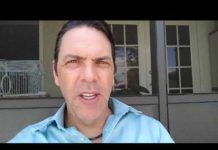 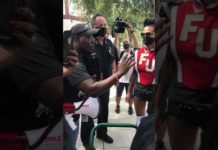